In addition to the kit of the signal box known from the film "The Olsen gang on the route", in Danish "Det Gule Palæ" I also dealt with the tractor DSB 57 shown in the film.

I have been designing the buildings for the Olsen gang interlocking based on original documents from 1907 since 2014/2015. First, a prototype was built in N gauge, then a suitable module.

Before that, however, I had already built some variants of the DSB 57 in N, some of which are of course operational. About the development stages of a somewhat too large housing on a Japanese drive as V1.0 with safe car Franz Jäger as V1.1 including sound of the Olsen gang title melody further to two versions of an N kit from EpokeModeller with drive in a ghost car as V2.0 and with drive in the locomotive as V3.0 then continued on Shapeways with a brass housing, which as motorized variant V4.0 had much better driving properties than the light plastic models, but was just too big.

That is why in several development steps I made a construction for a brass model as a variant V5.x with a largely scale housing slightly adapted to the chassis from a (half) drive of a Kato Portram or Centram, more and more details came to the model and the chassis was separated from the housing so that you can later flexibly access the interior. Version V5.3 is now available as a housing and is currently being completed.

In 2015 I did a photo shoot of the started module and the locomotives up to V5.0, pictures can be found on a small private page:
http://www.danilo-pietzsch.de/Fotoshooting_Modul_Gule_Palae_neu.htm

And since there should also be an operational locomotive for the TT gauge, the prototype developments have now also been completed by me there. A Japanese Tsugawa (TGW) TU-16A (14054) is required as the drive, as well as a decoder that can control the low-voltage motor with approx. 3 volts in analog and digital mode.
These housing models are now available via Shapeways at https://www.shapeways.com/shops/dp-model-railway . I also constructed a frame with wheelsets that can be used with the brass or plastic housing for a rollable model without drive.

The models from EpokeModeller in gauge H0 are also available as building kits as well as locomotives and figures. There are also other figures in Gauge TT, but no more vehicles and buildings. https://epokemodeller.dk/side-08-filmrelateret

To fill the gap, there is therefore some remedy for TT and N-railroaders. ;-)

First, I have now provided the TT variant with further details, with the N variant I may not be able to add quite as much. ... 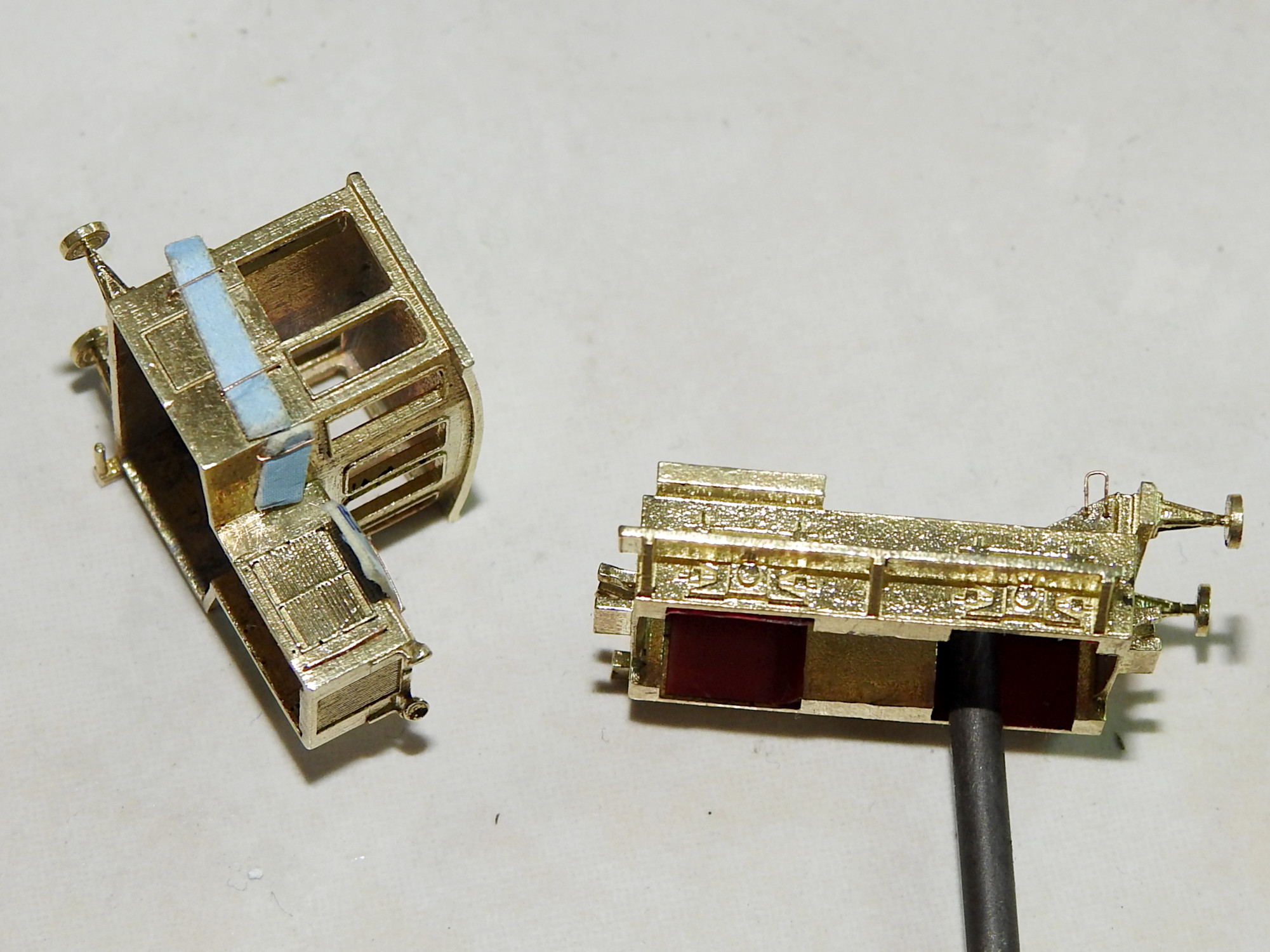 The handles made of 0.2 mm spring bronze on the chassis and housing are bent and built in according to the model in the film. Cardboard strips are located under the handrails to fix the height, the ends are bent inside and fixed with super glue. 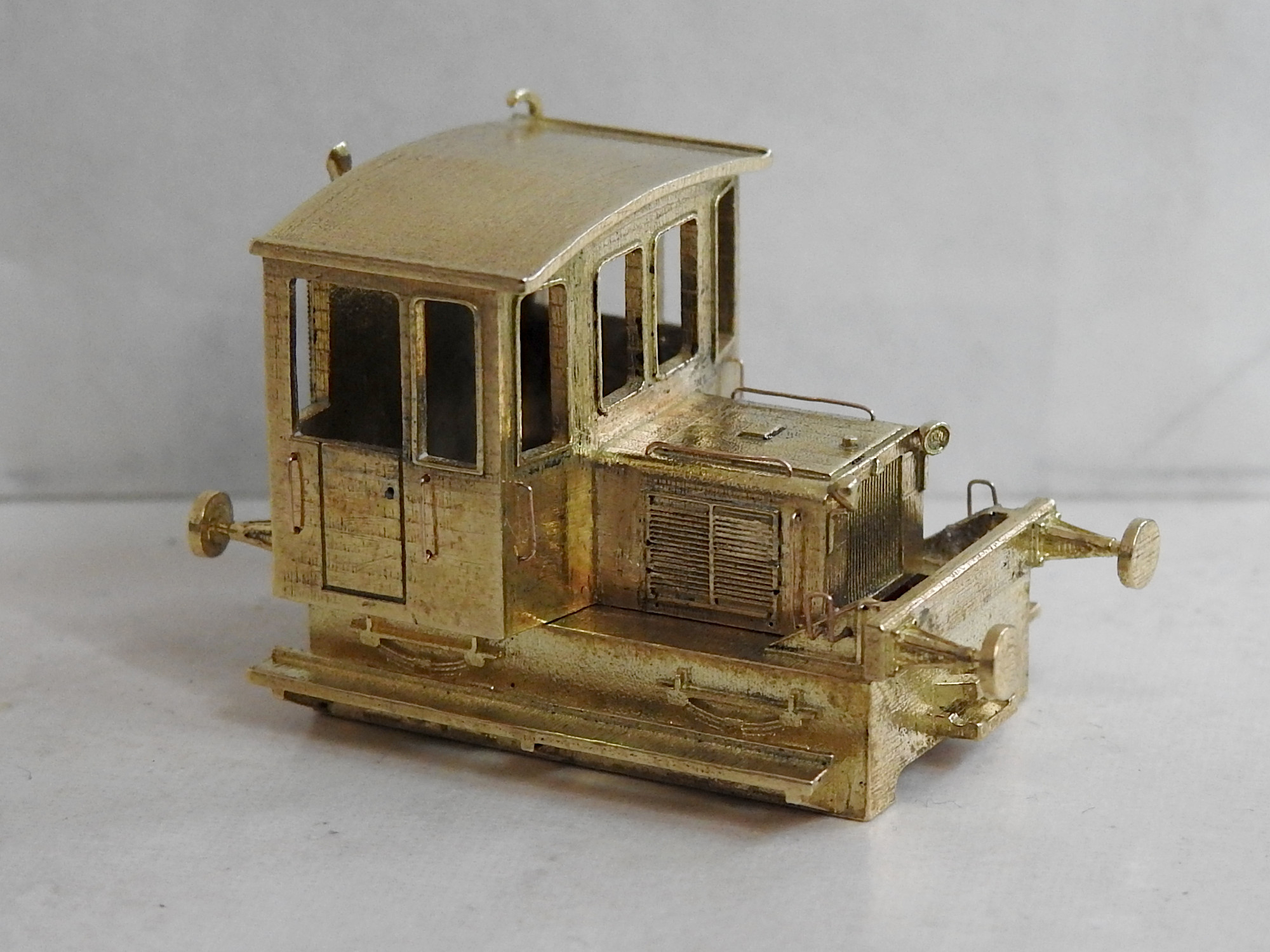 The handles made of 0.2 mm spring bronze when assembled. 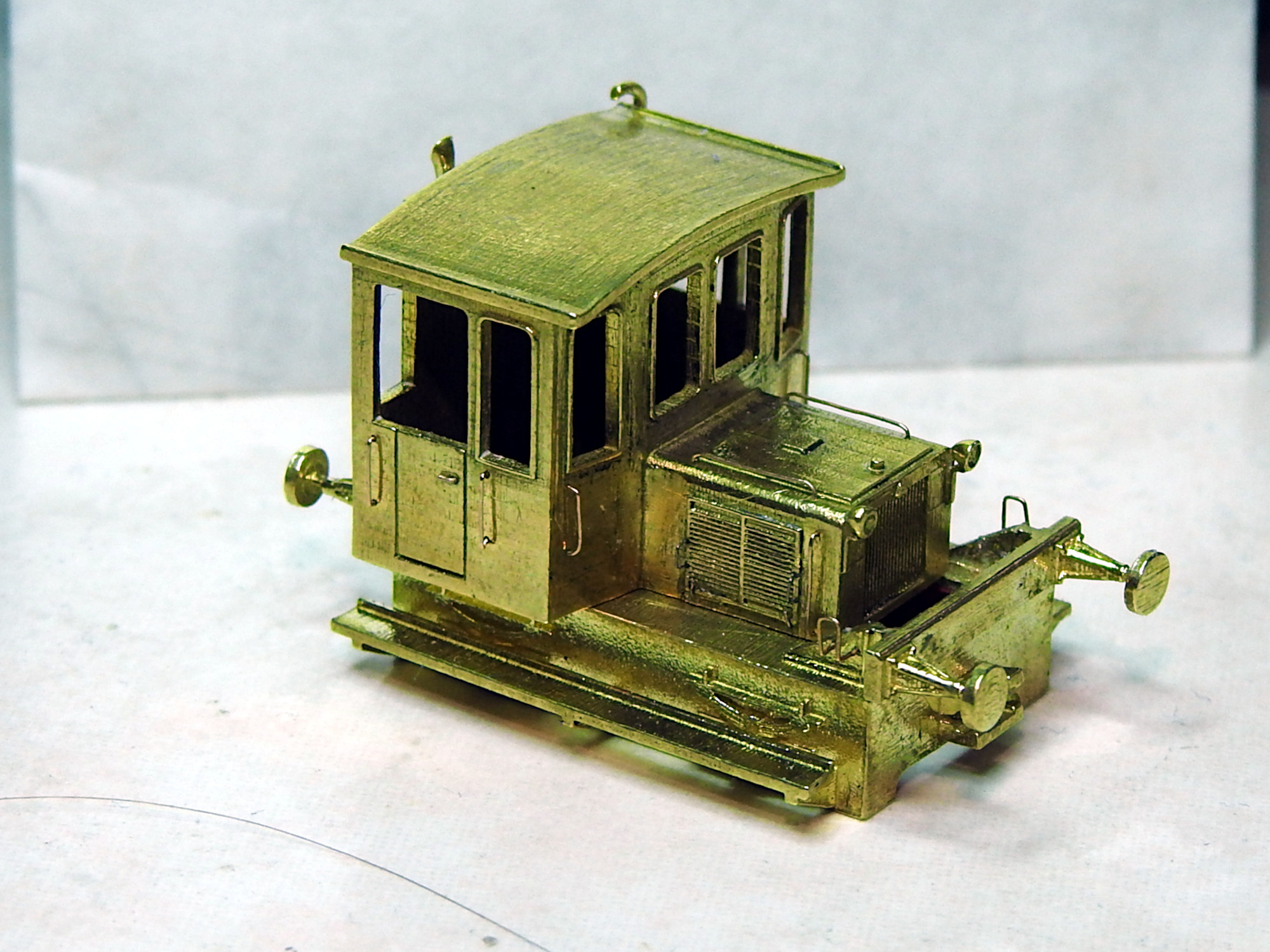 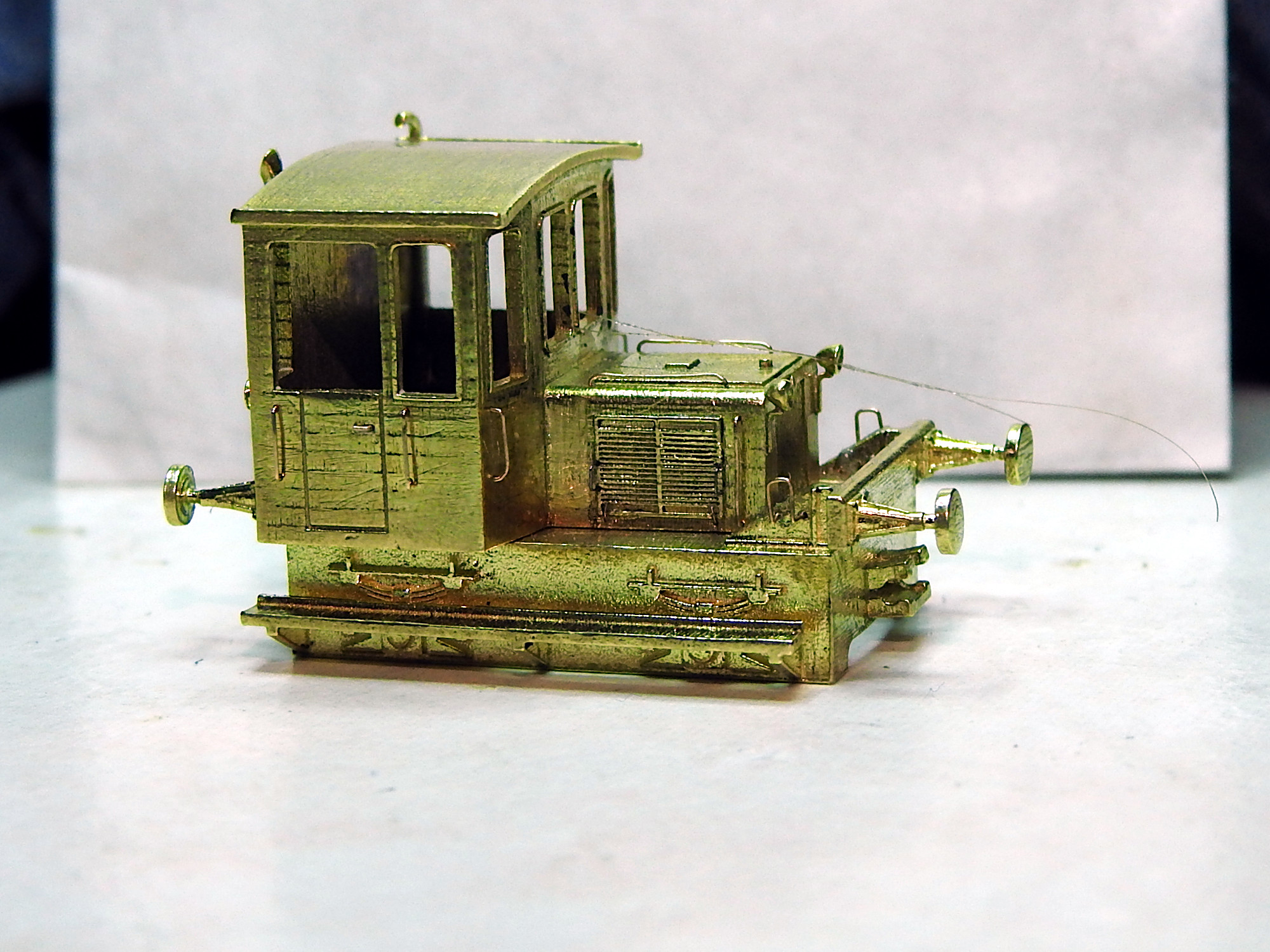 Finally, the pulling device of the shunting coupling was braided from one hair and installed preparatively. ;-) 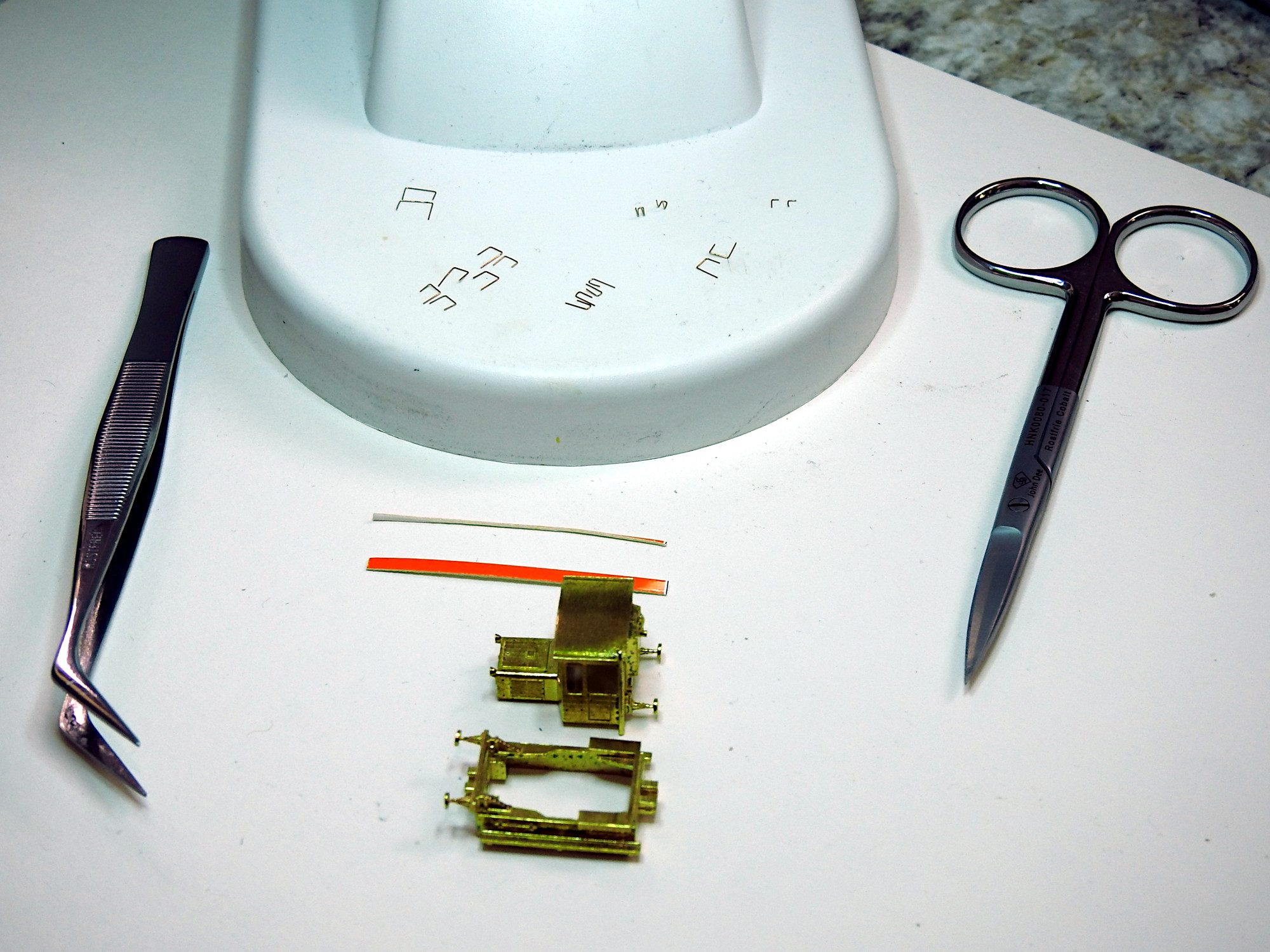 The handles, door handles and the hinges of the engine compartment flap were also attached to the N model. 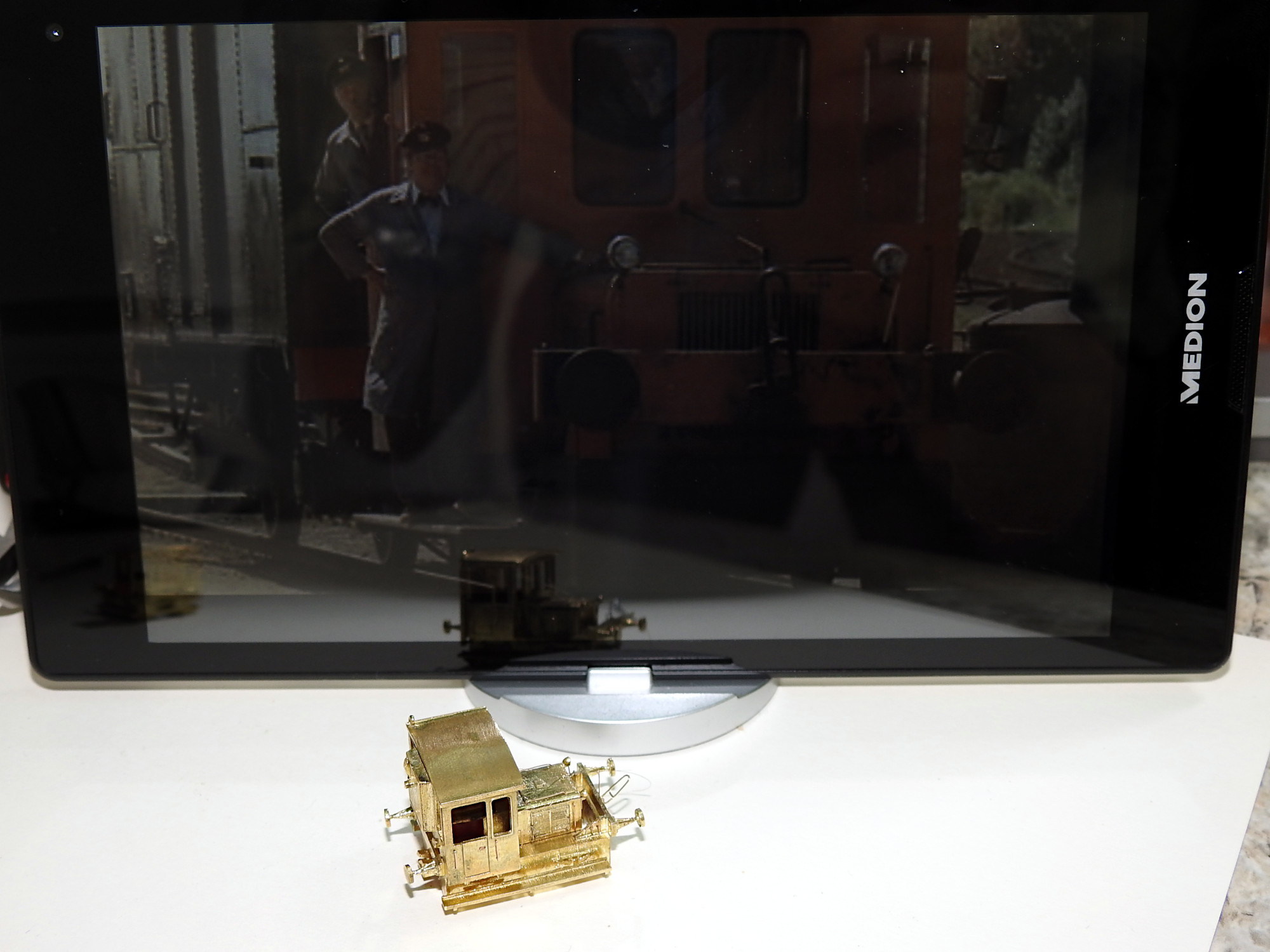 Now, further details of the shunting coupling have been attached to the TT model. 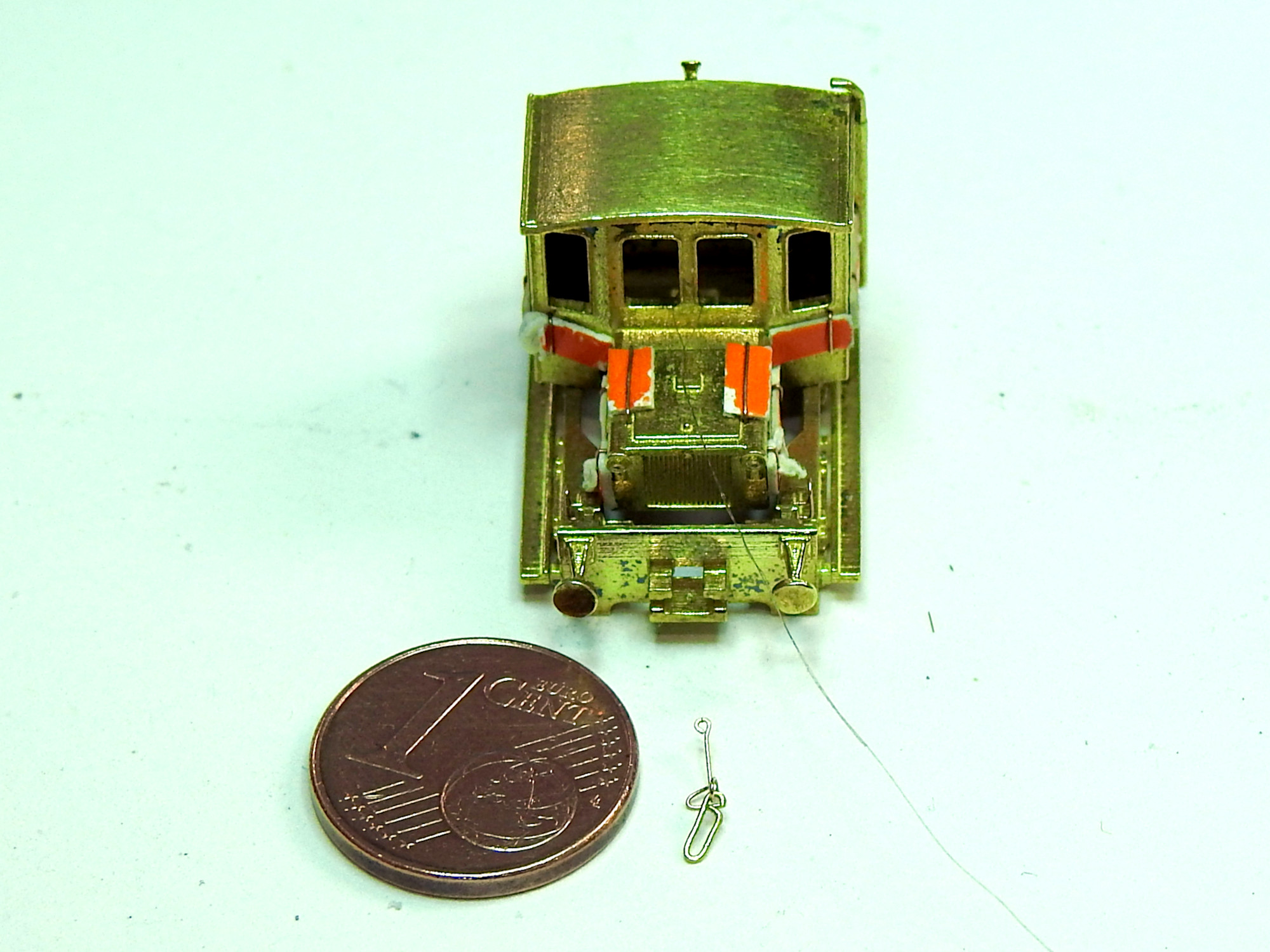 And because it worked so well, the shunting coupling was also attached to the N model with an extra wire pull (again from one hair). 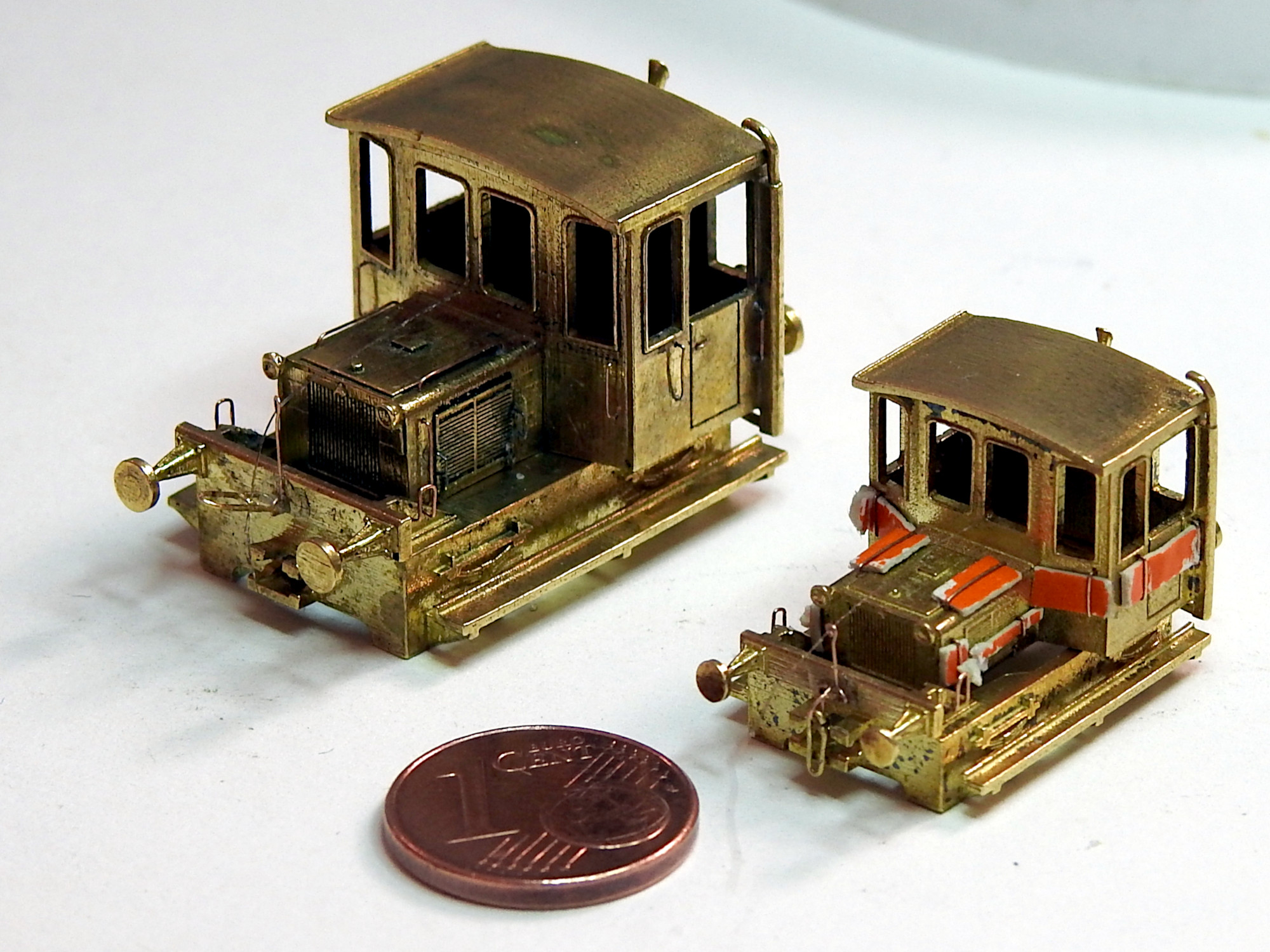 And here is the status of both models before priming. 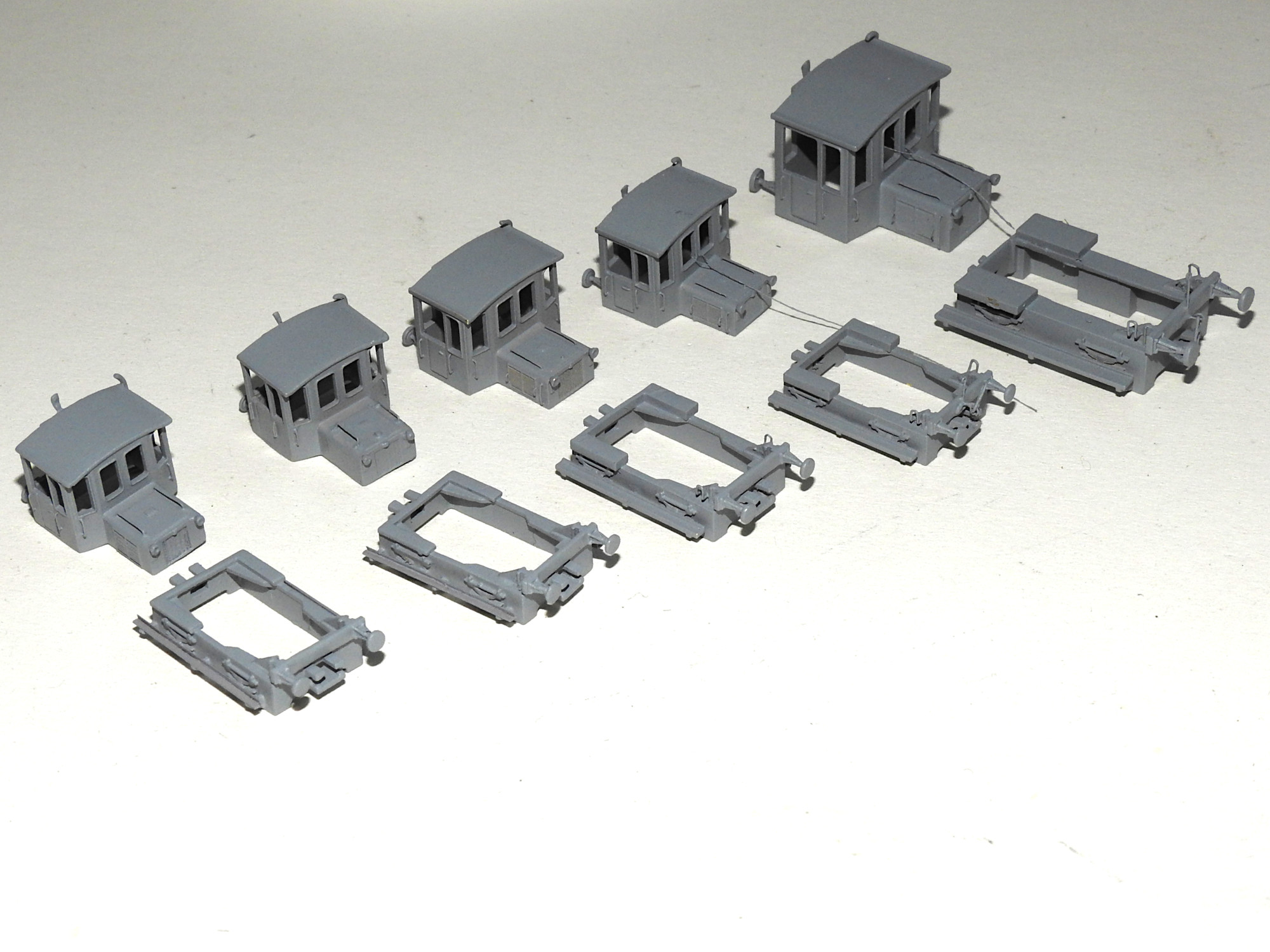 The models with the primer. 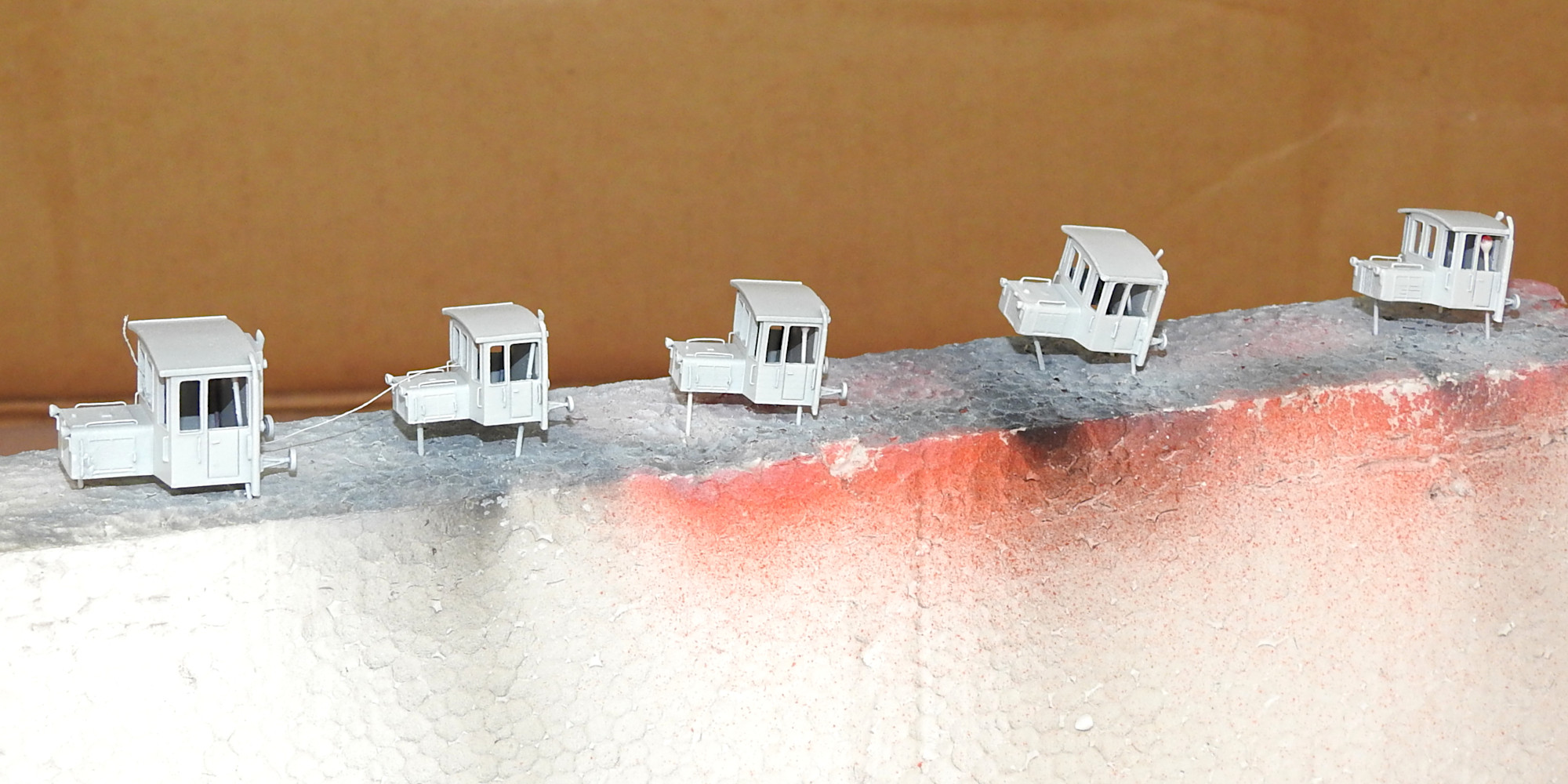 A light color under the orange color improved the effect. 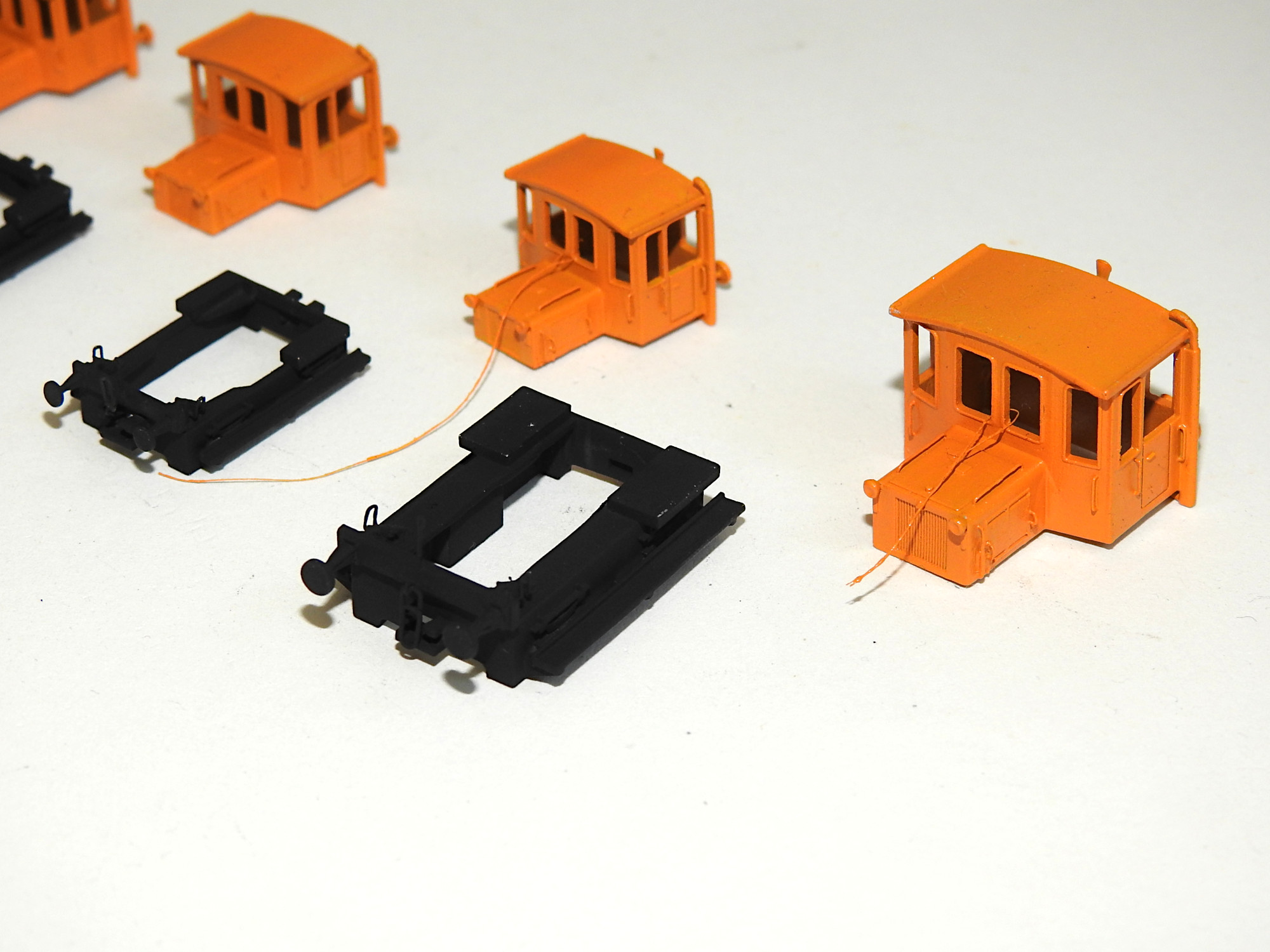 Paintwork in the main colors black and orange. 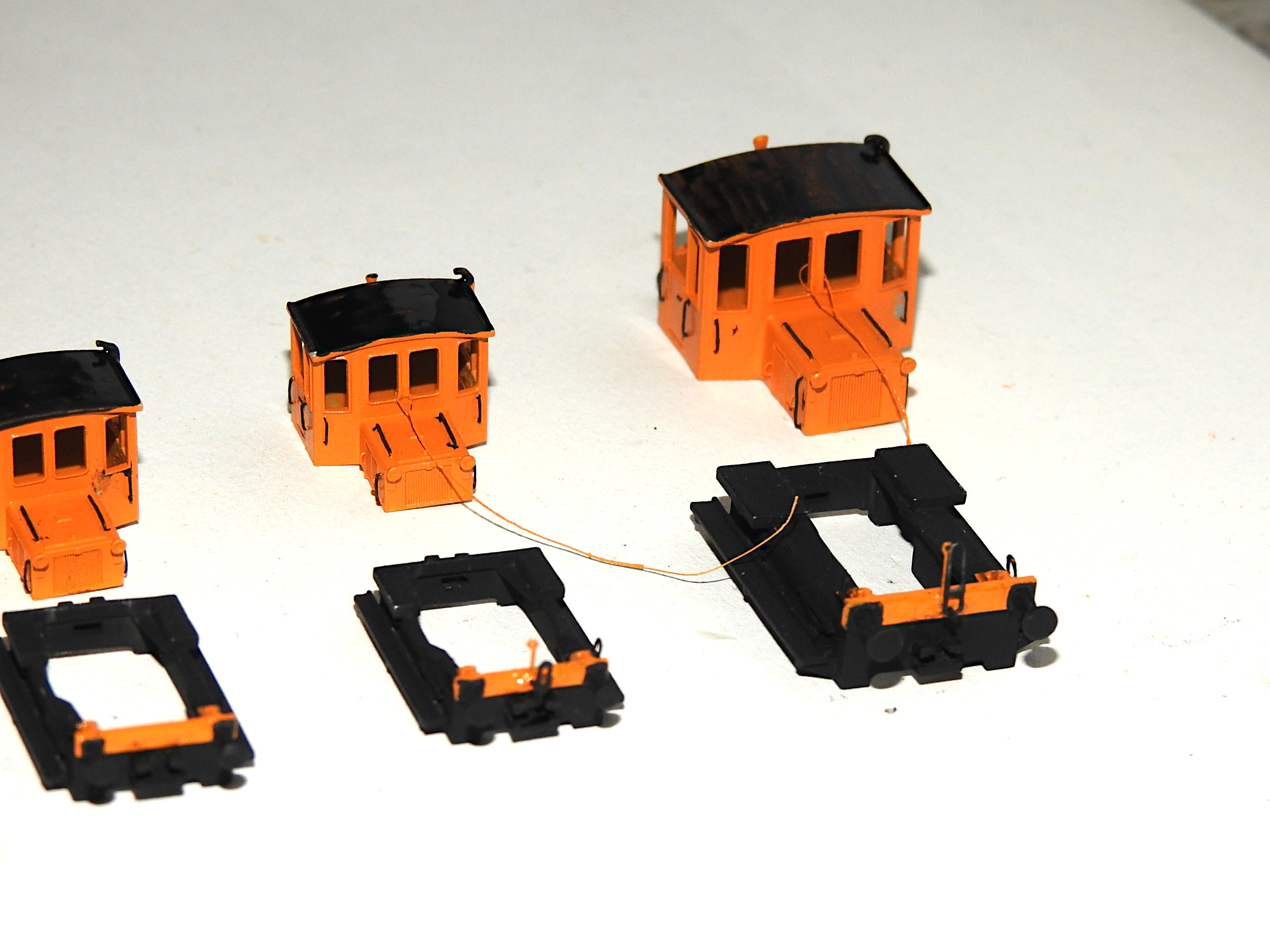 The first details can be seen. 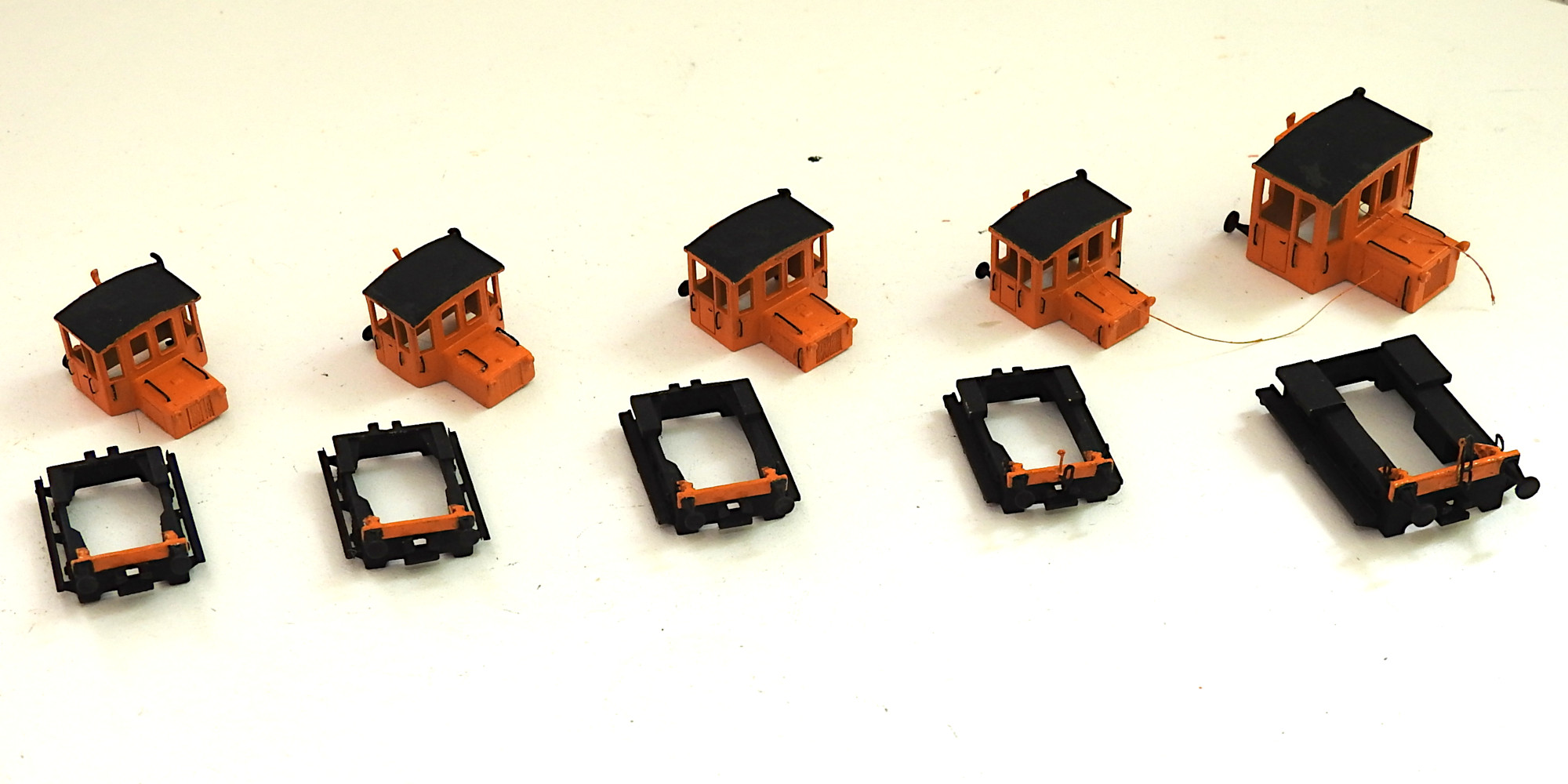 After touching up a few blobs. ;-) 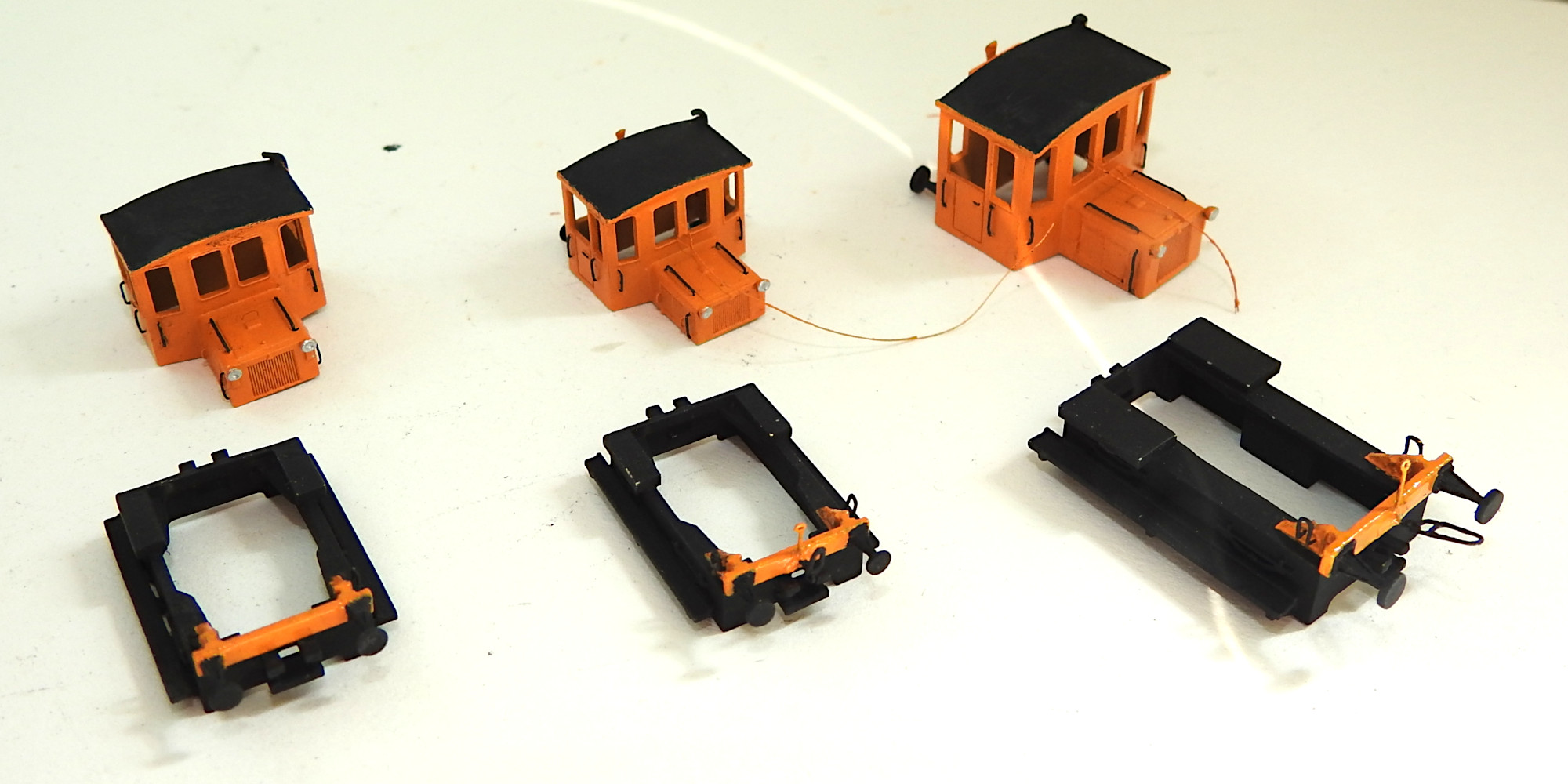 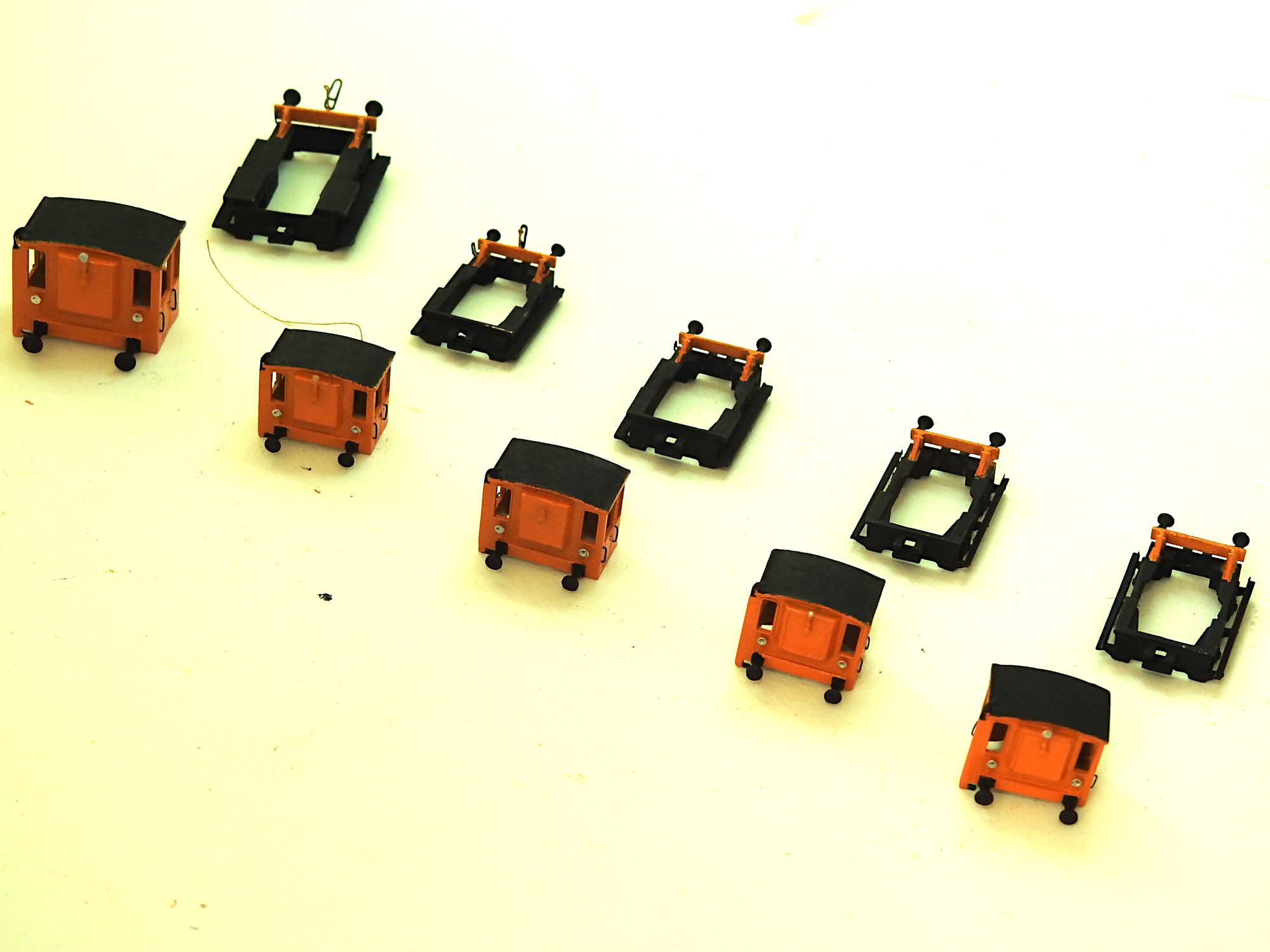 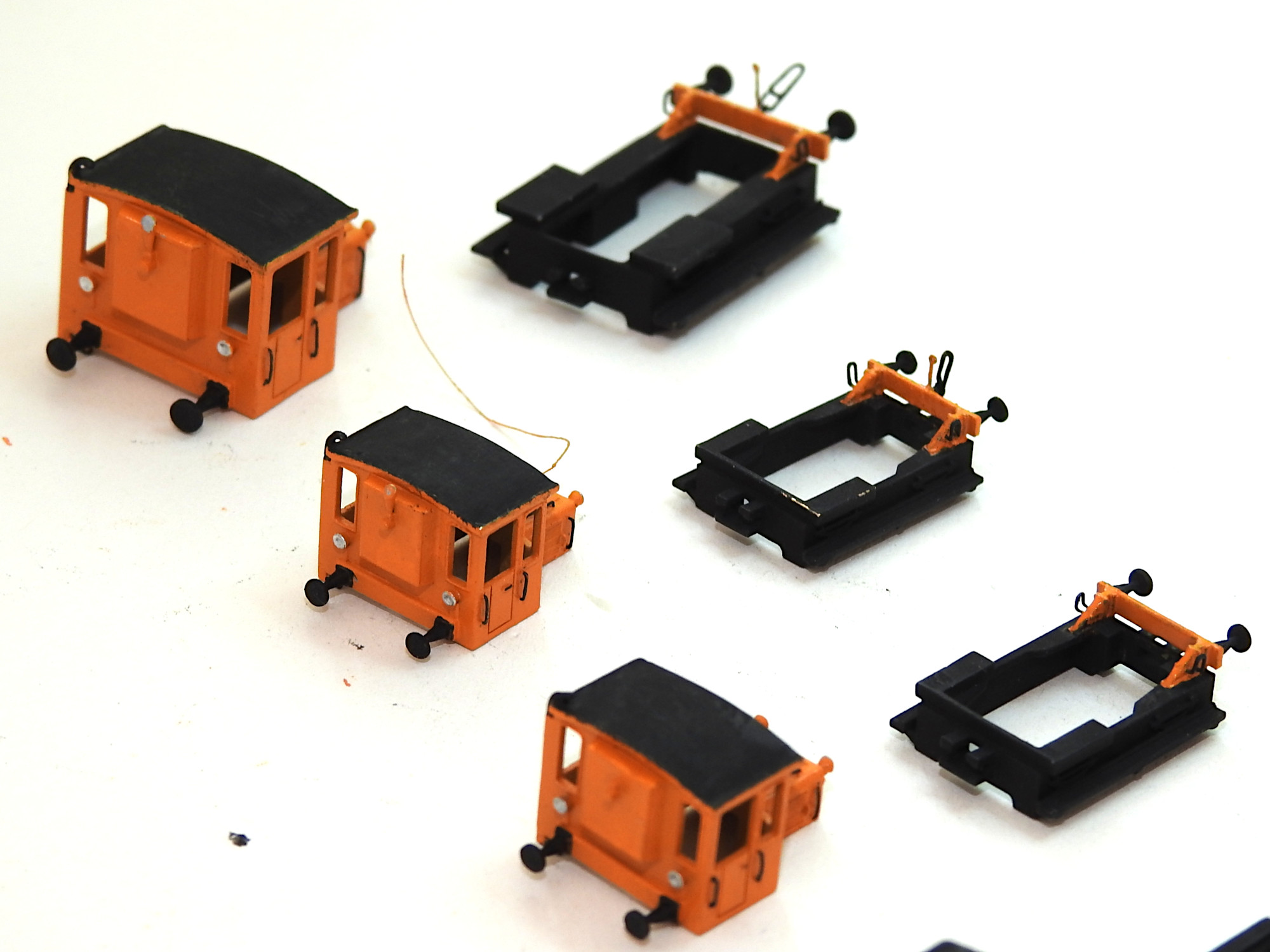 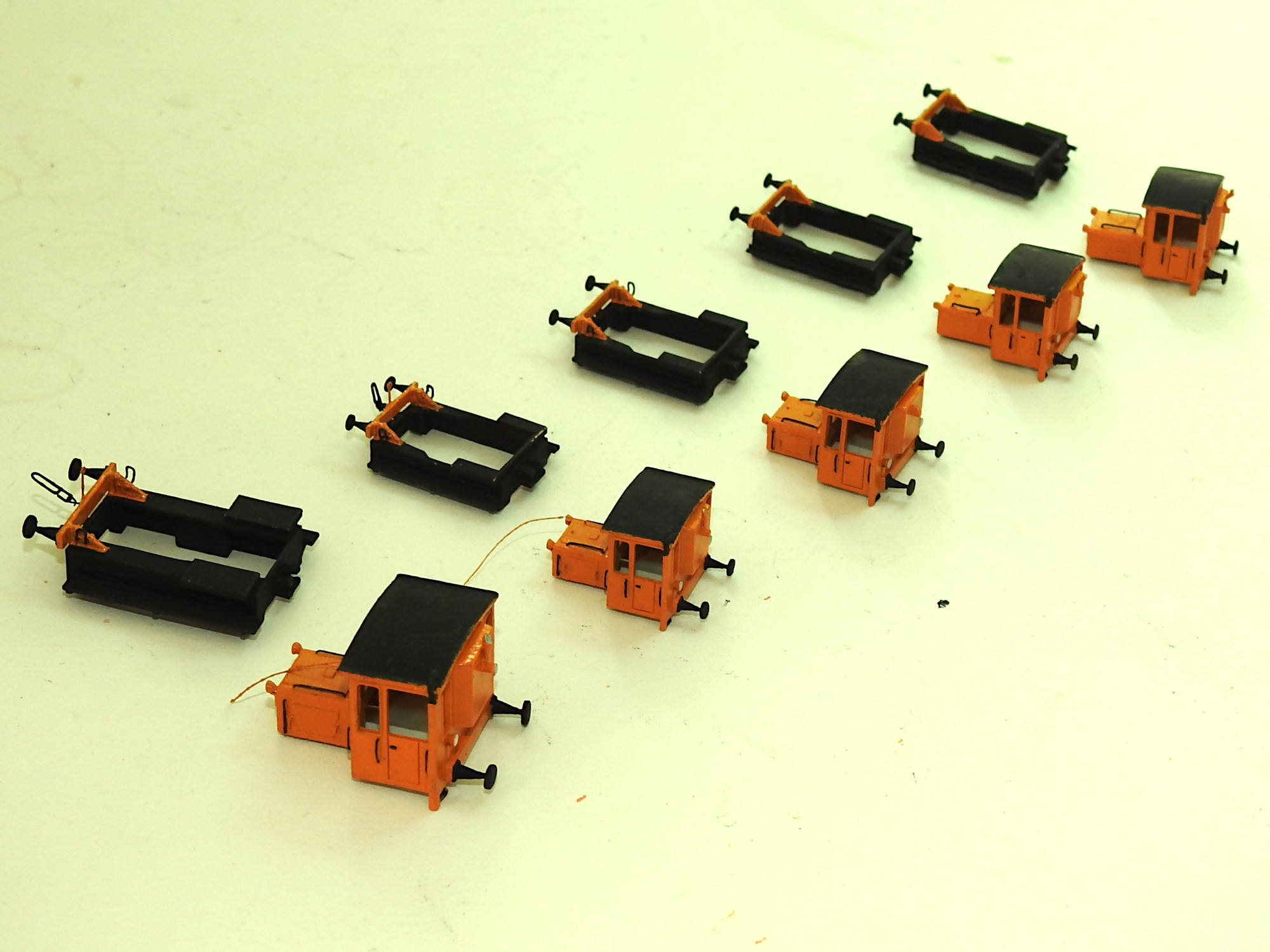 Now the models are ready painted, the decals and the top coat are still missing. 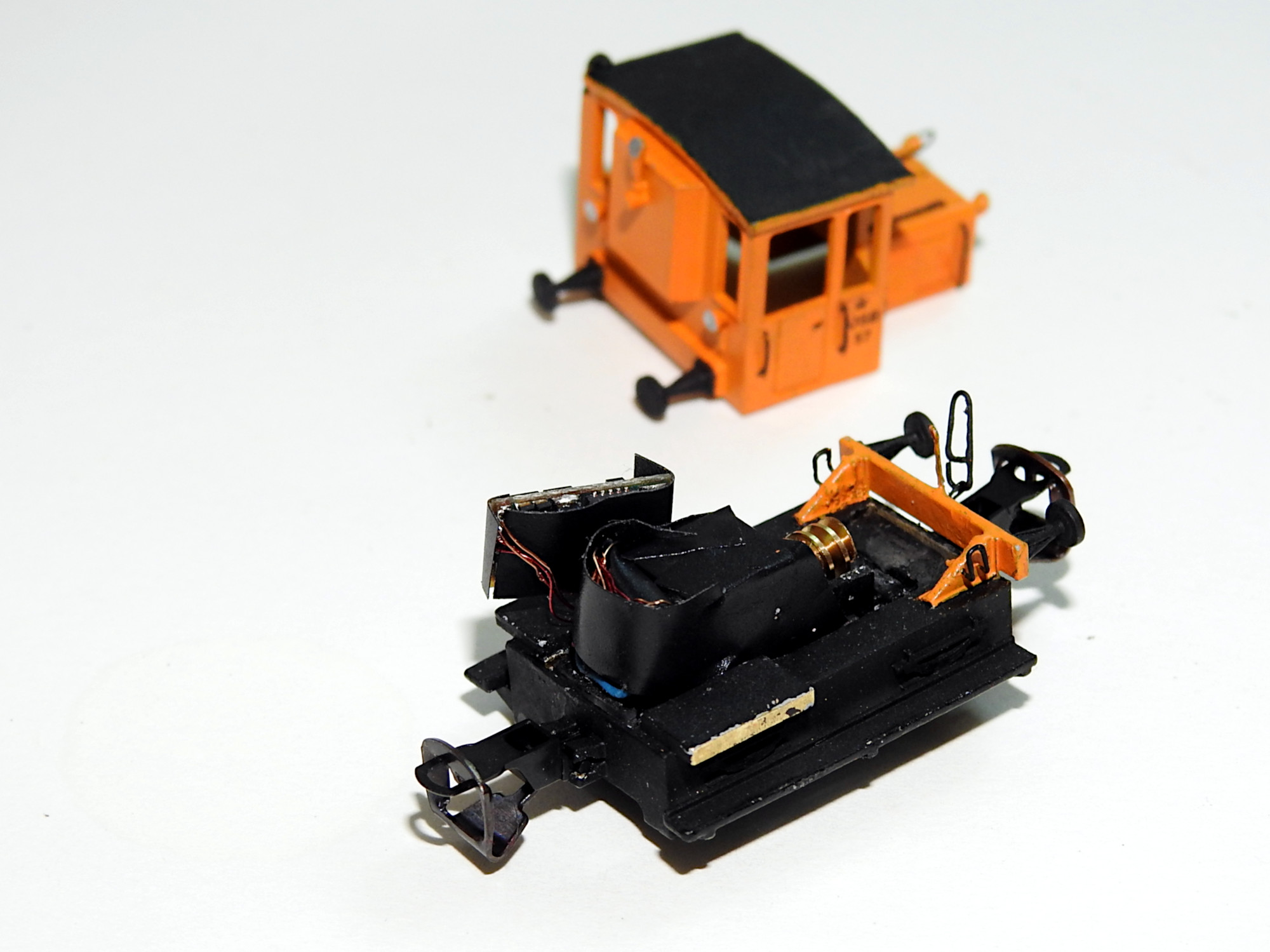 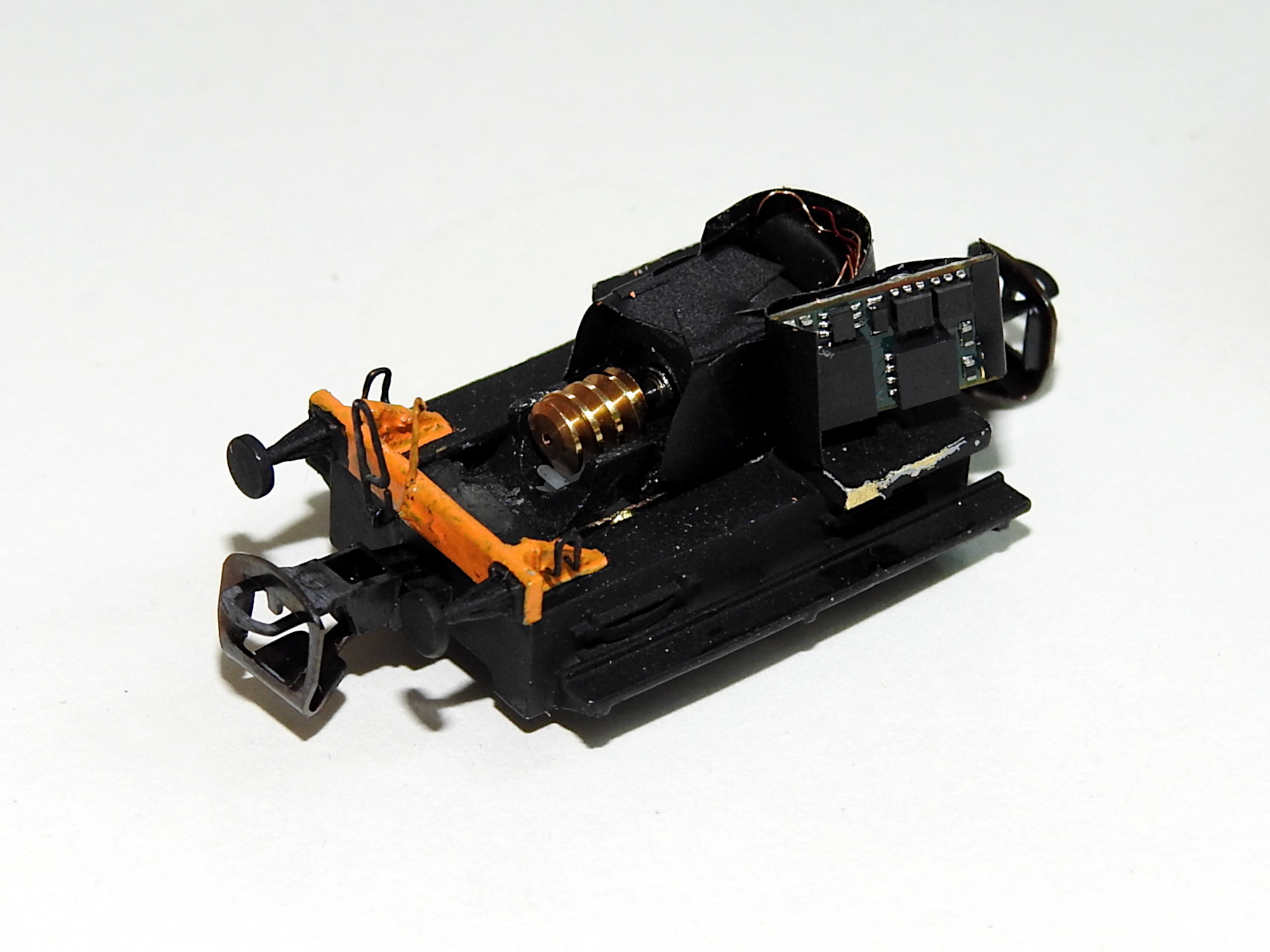 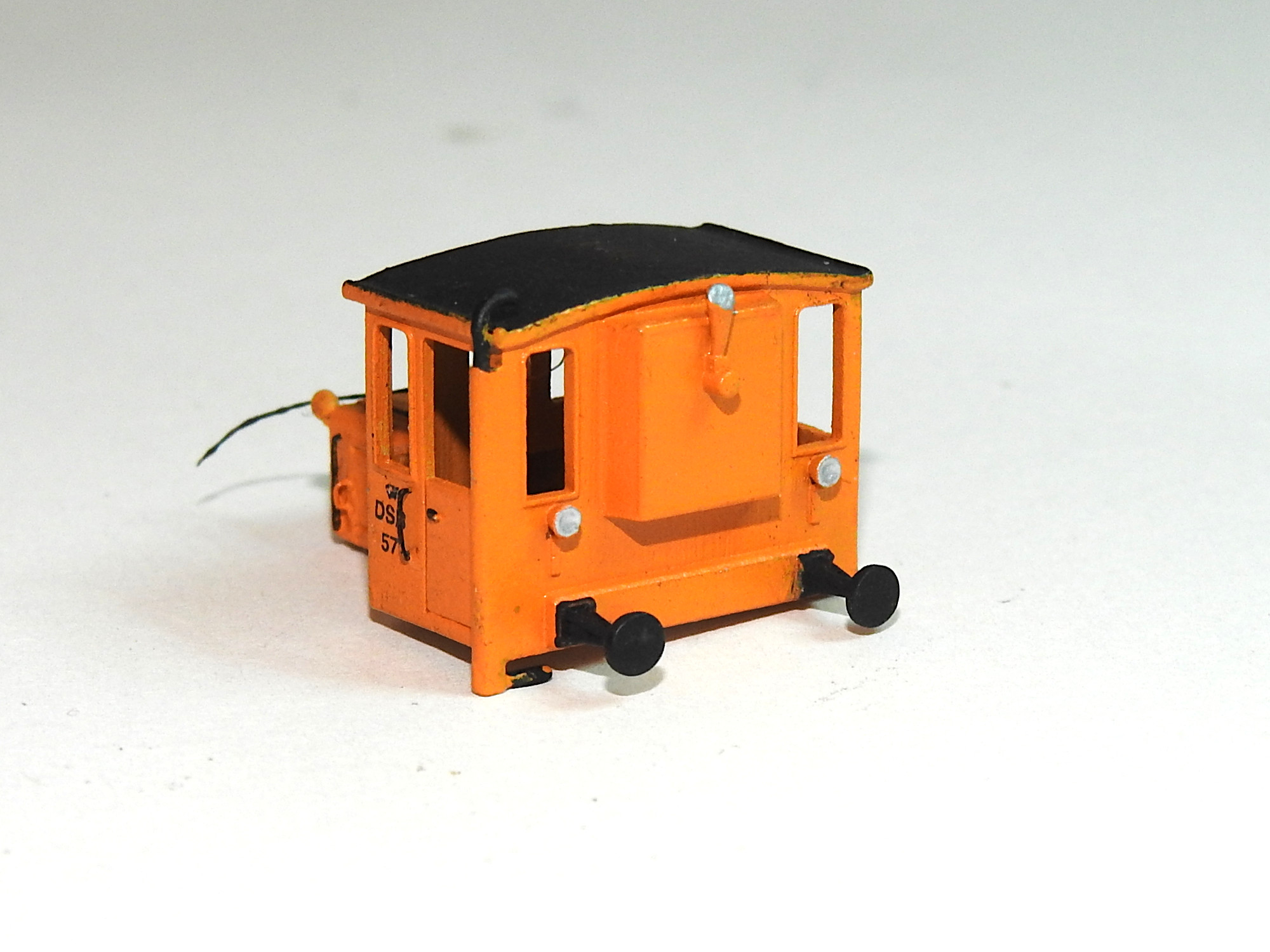 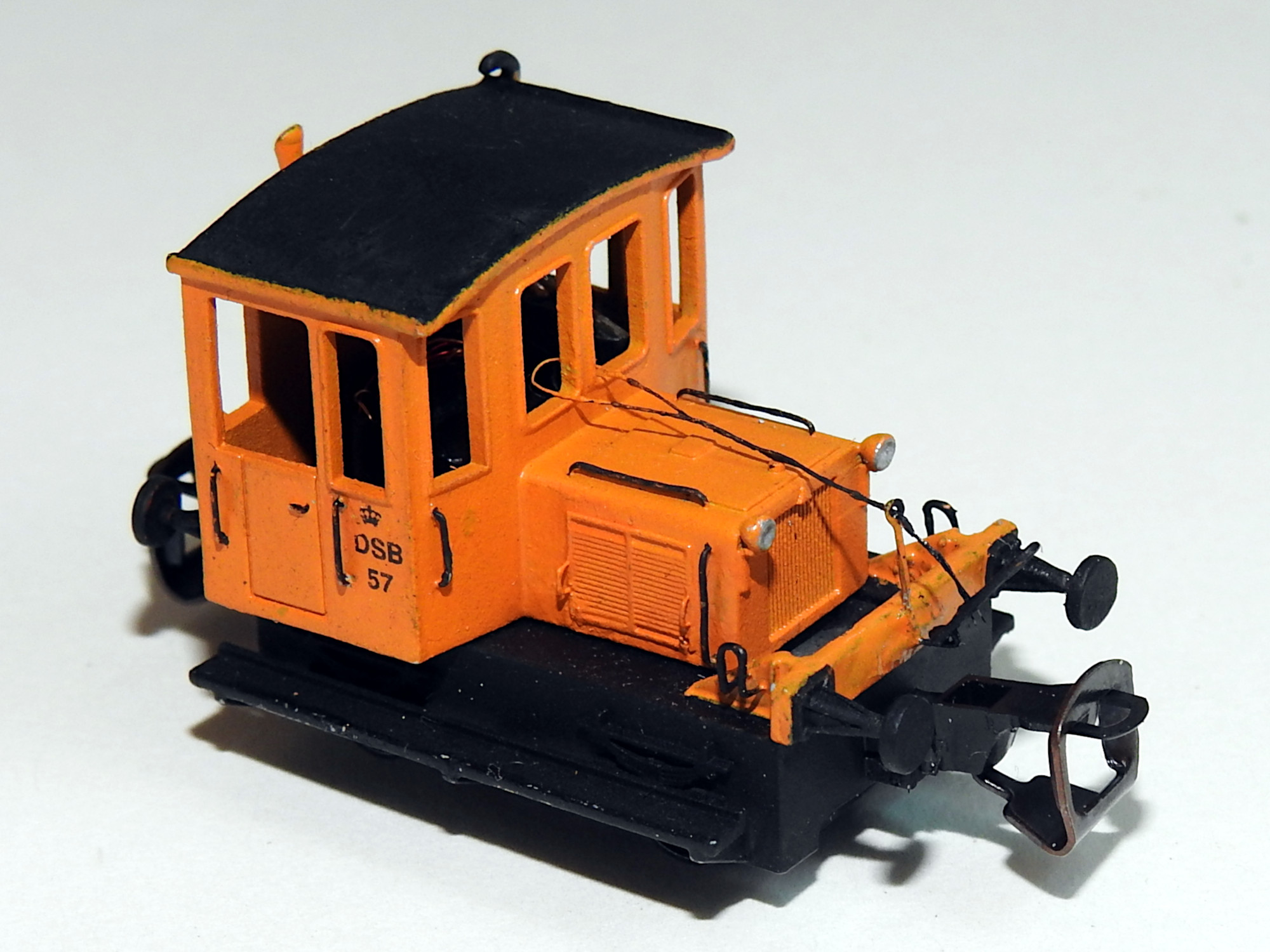 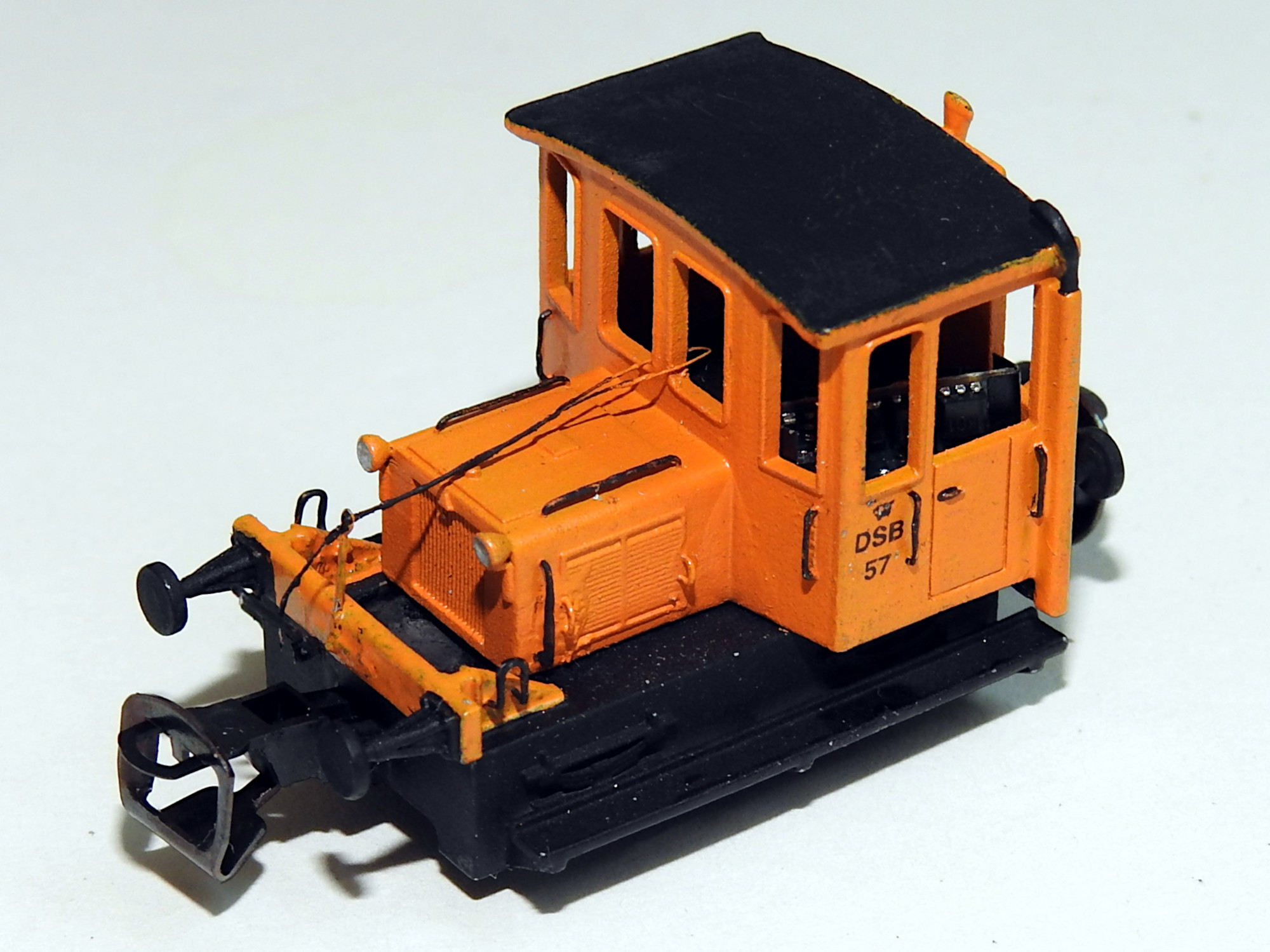 After applying the decals and the final coating, the TT locomotive was assembled and a D & H PD06A decoder installed. 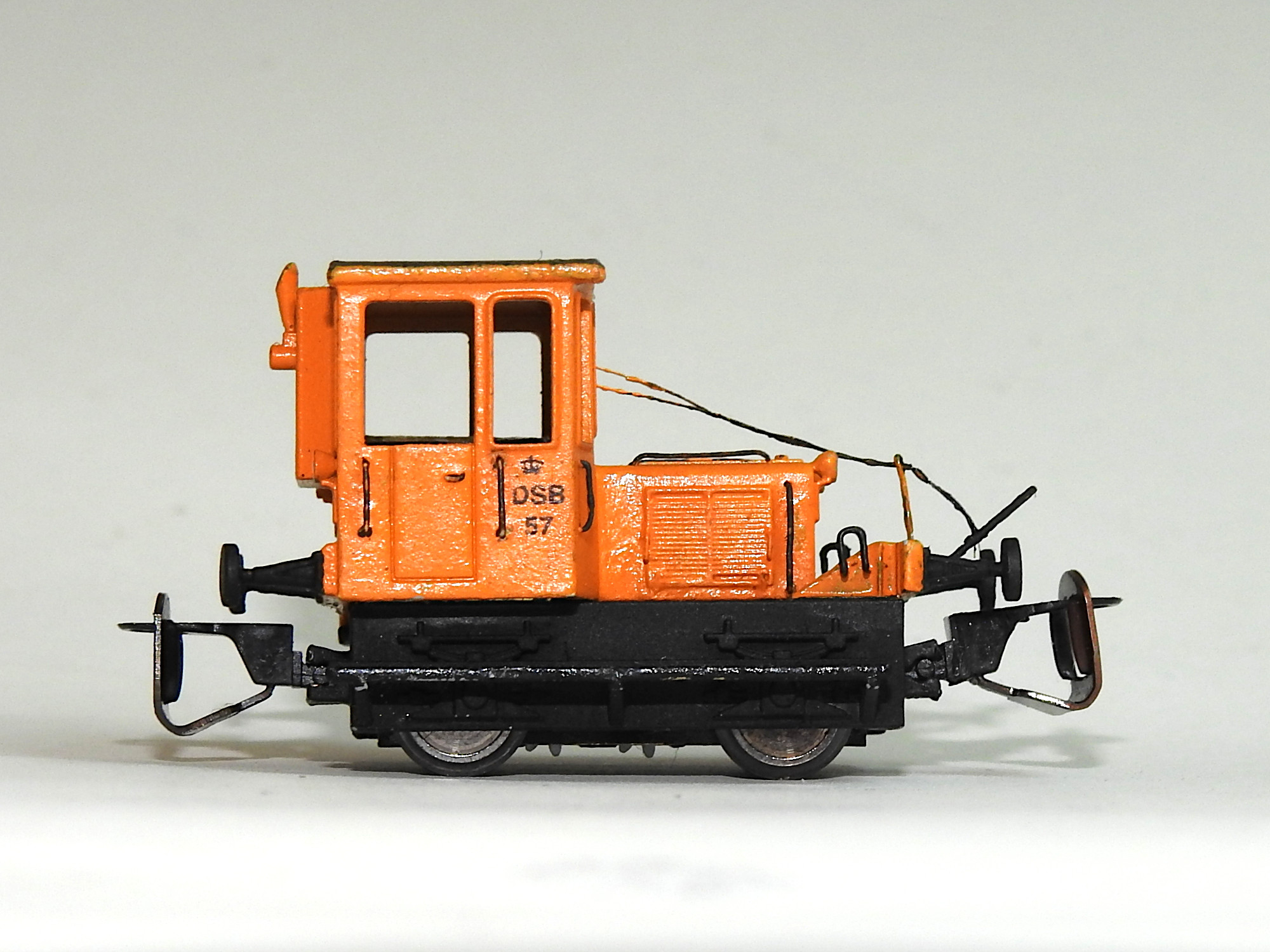 A clear view through the driver's cab can be seen from the side. 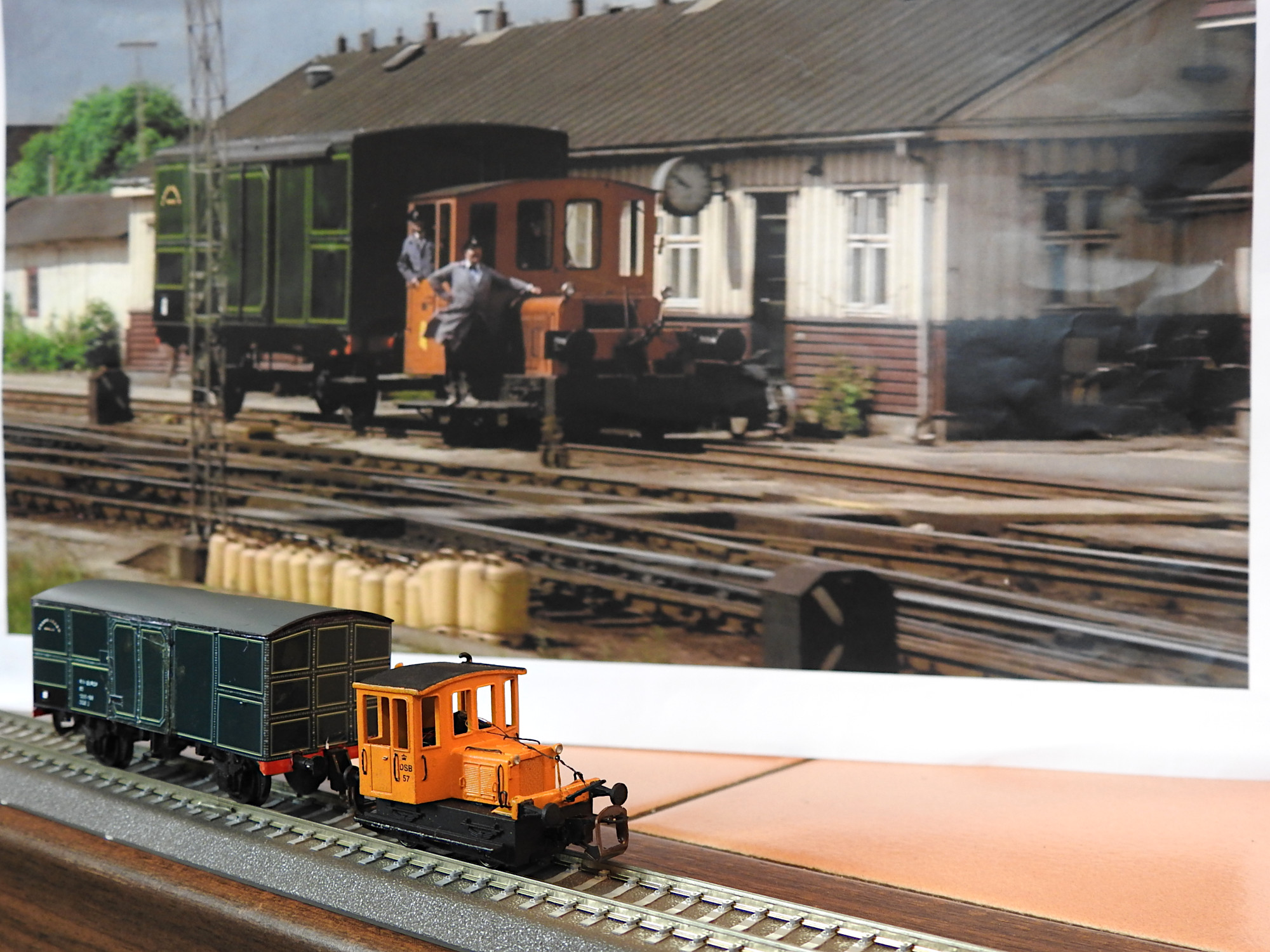 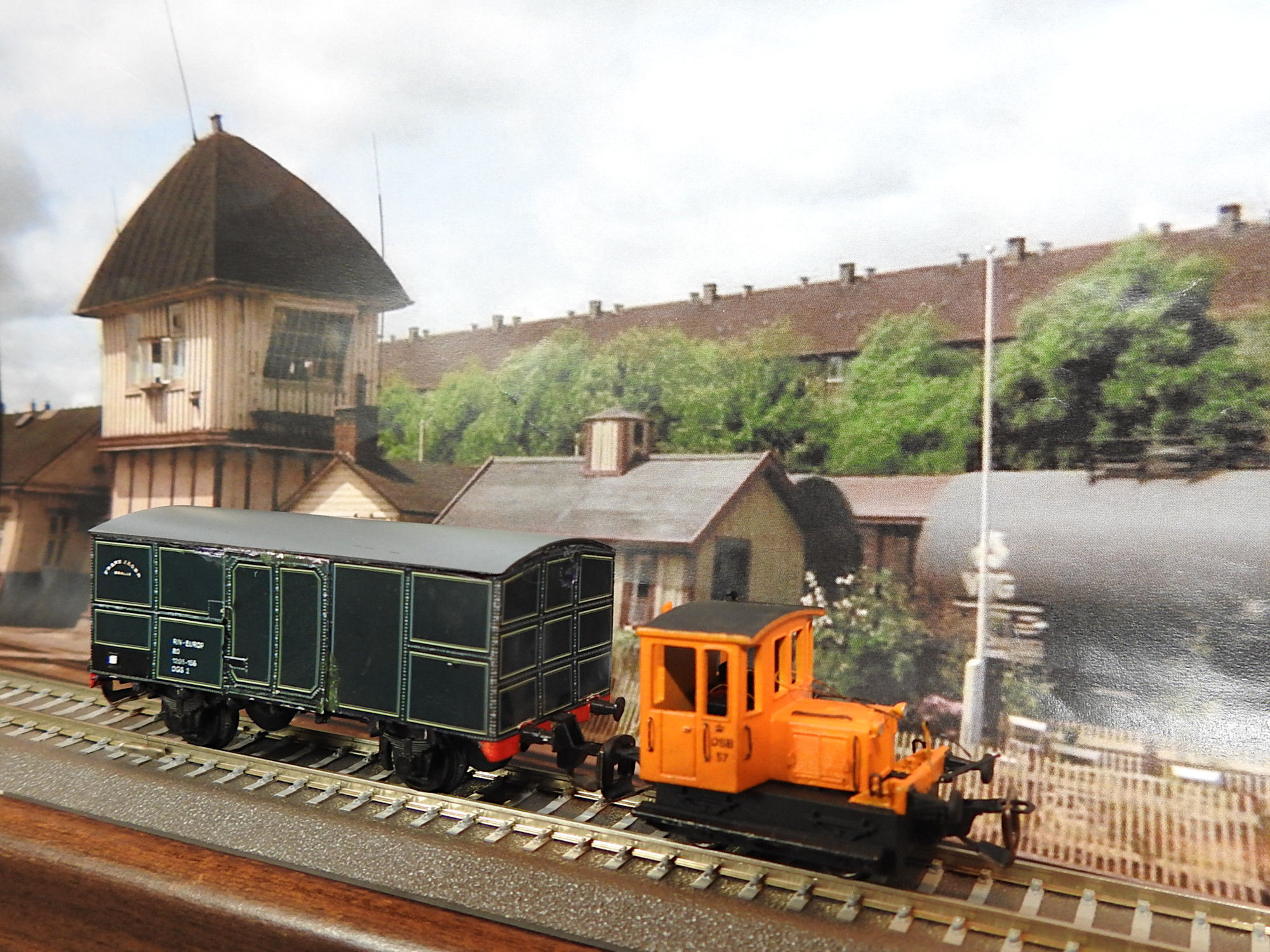 In front of the photo of the signal box, the model with the safe carriage also makes a good impression.

Now the videos while driving:
http://www.danilo-pietzsch.de/Videos/VID-20200709-DSB_57_analog.mp4
Analogous to the train also runs a little faster.

http://www.danilo-pietzsch.de/Videos/VID-20200709-DSB_57_Antrieb_original.mp4
The original drive is braked better by the decoder.